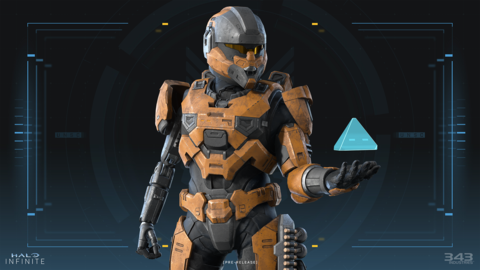 After Halo Infinite’s long-awaited first beta, the team at 343 Industries has been hard at work gathering and processing player feedback from the play test. Now, in one of 343’s characteristically long and in-depth blog updates, the studio is sharing some of that feedback and how it’s being implemented–including updates to Infinite’s contentious radar changes.

343 first hinted that Infinite would be shaking up Halo’s classic motion tracking radar all the way back in 2017, when similar changes were introduced in Halo 5. In that game, the changes were only introduced in Ranked mode, limiting the motion sensor to only show players who were sprinting or shooting, rather than all walking-speed movement. While the changes made sense for competitive Ranked play, a similar iteration in the Halo Infinite beta wasn’t well-received by play testers.

Want us to remember this setting for all your devices?

Please use a html5 video capable browser to watch videos.

This video has an invalid file format.

Please enter your date of birth to view this video

By clicking ‘enter’, you agree to GameSpot’s

“The Combat Sensor, or radar, that sits in the bottom left of your HUD followed a different set of rules than previous Halo titles,” the Halo Infinite multiplayer team explained in the blog post. “It only displayed enemies when they were sprinting or shooting, which was more in line with Halo 5’s ‘Threat Tracker.’ We knew that this implementation was going to feel different, maybe even a little contentious, and that’s why we wanted to get feedback on it as soon as possible in the Tech Preview.”

The outcome of the play testing is that 343 is going to revert to a much more traditional radar for Halo Infinite, with the blog post saying “most players” preferred the old style radar for social matches. “We’ve updated the Combat Sensor to feel more like the ‘Motion Tracker’ of old, which shows all movement besides crouch-walking, and should have that ready for folks to test in the next flight,” the post promises.

The post goes through a whole lot more detail on player feedback that’ll be implemented into the game, with some changes due before the next beta test, some in time for the game’s launch on December 8, and some scheduled to arrive post-launch. Check out the rest of the feedback in the full blog post.

If you want to try out Halo Infinite before its full launch in December, there’s still time to sign up as a Halo Insider for the next beta, which will feature 4v4 Arena and Big Team Battle.

GameSpot may get a commission from retail offers.

Jagged Alliance 3 In The Works From Tropico Developers

SpongeBob SquarePants: The Cosmic Shake Brings Sweet Victory Back To The Franchise

AUTOMATION EMPIRE gameplay | How to Get Started! (PC game)

How to control your pc games using phone wirelessly (it's FREE)